There’s nothing wrong with you! 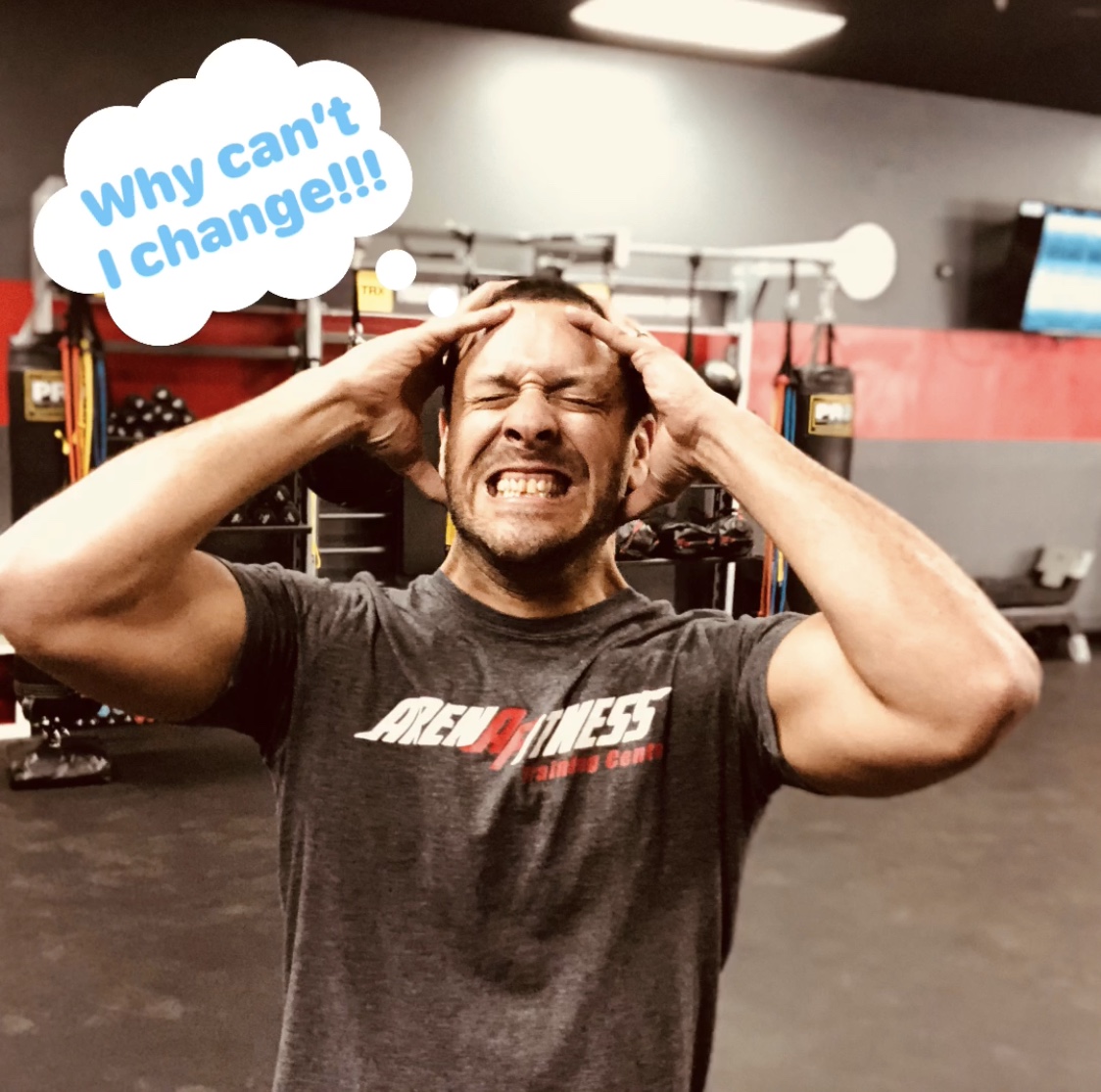 Why is change so difficult?

Dozens of people. Times 12 months. Times 15 years. That’s how many people I’ve spoken to about their fitness needs since Arena Fitness opened in January of 2003. People inquiring about membership. Members sitting down with me for consultations. People outside of work, picking my brain. People hoping that personal training or some other form of supervised exercise and nutrition will help them.

I’ve spoken with thousands of people about their fitness needs over my career as a business owner, and that doesn’t factor in the 10 years prior to that as an independent personal trainer and gym manager. Thousands of people.

It’s not that we’re a huge company or that I’m an especially important person. It’s just a function of time; time served in a particular industry. Time served as the first point of contact for inquirers. The steady drip, drip of calls and internet submissions compounded over years has placed me on the line with a lot of people, discussing needs and challenges, sharing stories, answering a lot of questions.

And in every conversation, I’m going to ask one thing of whomever is on the other end of the line:

“Tell me about yourself.”

And most stories are stories of struggle. Of frustration.

I used to work out a lot, you say. Before I had kids, when I was in college. Before work took over my life.

I haven’t trained in a while, you say.  I just can’t seem to stay on track.

I need motivation, you say. I have a hard time getting myself to work out.

And in many, if not most, of the conversations, there’s a silent but ominous question running beneath your story. A question masked as a conclusion, a judgment.

If you’re one of the people stuck on that question, I want you to understand something:

There’s nothing wrong with you.

If you’re struggling to change your habits and behaviors, if you struggle to maintain consistency with your exercise and nutrition, it’s not your fault.

Listen to that again; it’s not your fault.

The Brain Science of Change

While your brain is an amazing supercomputer, it’s running a really old software program. Tens of thousands of years old, and, unfortunately, outdated. Your brain evolved through hundreds of thousands of years of scarcity and danger. The vast majority of the human experience has taken place during times when predators, weather, starvation, famine and disease posed clear and present risks to your survival. And your brain’s primary fixation is survival. Survival for YOU and survival for your species.

Change, real change, or variation of a routine that has resulted in survival for you, makes your brain very wary. If what you have been doing has resulted in continued survival, why change what you’ve been doing? That’s your brain’s line of reasoning. It can’t really discern between healthy and unhealthy or good and bad, except to the extent that it might pose a risk to your survival. Deviating from routine, doing something uncomfortable or unfamiliar makes your brain nervous and suspicious, and it will tend to nudge you back toward the familiar because it believes it to be SAFE. And SAFE equals SURVIVAL, and if the brain can lead you to survival it has succeeded in it’s job.

When you’re trying to change your habits, then, you are in some ways working against what the brain perceives to be in your best interest. You’re swimming upstream.

The other reason your brain resists change…

Another function our brain performs is as a strict energy auditor. Remember, our brain evolved during long periods of scarcity and famine, and it still considers those risks to be legitimate, although, for those of us in 21st Century America, they aren’t (except in cases of extreme poverty). Change requires more energy and effort than routine and homeostasis (basically, the body’s equilibrium) and the brain doesn’t like sparing unnecessary calories. More on this in the next post.

Don’t blame your brain. Remember, it’s what kept us alive as a species during really tough times. We aren’t really designed for a dangerous environment; we don’t have armor like a rhino, claws like a bear, speed like a gazelle, climbing ability like a monkey, teeth like a lion. We are thin-skinned, weak and slow, compared to other species. Our ability to work together with other humans and our highly developed pre-frontal cortex are our defenses against nature and they have done a bang up job.

So, where does this leave us?

Knowing that your brain isn’t necessarily on board when you’re trying to modify habits isn’t a death sentence. It doesn’t mean that you’re doomed to fail AND it doesn’t absolve you of the responsibility of striving to improve. After all, in a strange irony, the brain is also wired to reward progress as a survival mechanism, it’s just a matter of knowing how to access that reward cycle in order to produce results.

But it’s important to understand why the struggle is real so that you can:

There’s nothing wrong with you. Your struggle is normal, it makes you human. Stop beating yourself up.

If you want to reach your goals, you need a plan. We’ve said this many times before, but you need knowledge, a system and support. This is the process of:

In the meantime, remember; your brain is just doing it’s job. The challenge is that it’s job is not consistent with your present environment. Cut yourself some slack. You’re not broken.