What if everything was just an experiment? 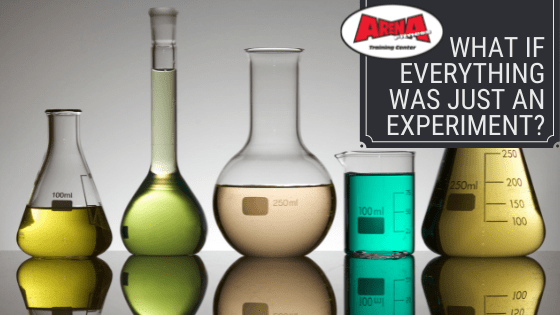 A lot of the time, it goes like this:

We have this idea that we want to improve in some area, maybe it’s health, maybe our relationships, maybe it’s in our profession or how we perform in school. Whatever it is, we have this idea about improvement and it becomes a goal, and then we try to accomplish it, and a lot of the time it doesn’t happen.

Often, this has to do with how we come up with the goal, the steps we take to diagram out a realistic path to completion, and the degree to which our motivation aligns with our vision.

This is usually where the plan goes off the rails. We don’t follow a proven, established method for goal setting and achievement, so we don’t really have a credible pathway to success. This is a planning and preparation issue, not an execution issue.

But even when we do the preparation properly, sometimes it just doesn’t go the way we want it to. There are a number of reasons for this. Some of them may be unforeseen or external to us.

Whatever the reasons are for us not accomplishing our goal, it isn’t uncommon for us to beat ourselves up for falling short. We cloak the situation in language of failure, of self-judgment, as if it goes beyond the fact that we simply didn’t achieve the goal. It becomes about US.

Which is bullshit. There are a million reasons why you didn’t hit your goal, most of which have nothing to do with character, and almost always have to do with the fact that no one ever taught you how to design and execute a goal-based plan for success.

They don’t teach that in school. How the hell would you know?

Instead of fitting into this binary ideal of success or failure, what if we treated goals as experiments?

What if we brought that mindset to what we do, one of experimentation?

Mathematicians work with formulas. They form assumptions based upon their knowledge, and they create formulas that they anticipate will produce the result that they want.

A and B represent variables in the formula, and if each performs in its expected way, the result will be C.

But time and time again, when chalk is put to blackboard, A and B do not, in fact, perform in the expected way, and the mathematician ends up with D. Or Pi. Or whatever, I’m not a mathematician, but you get the picture.

When that happens, the mathematician reviews, comtemplates, and adjusts the variables. SHE didn’t fail. The numbers just didn’t add up, so she makes alterations and tries it again.

It was the FORMULA that didn’t work.

When you come up with a goal, and then create a pathway for achieving it, you’re simply creating a formula.

If, after 8 weeks, the blood pressure hasn’t improved, you adjust the formula.

Maybe you extend the duration of the cycling to 30 minutes.

Maybe you increase the intensity to 70%.

Maybe you increase the frequency to four times per week.

Maybe you extend the time frame out to 12 weeks.

Maybe you change the exercise modality from cycling to hiking with a backpack.

Maybe a combination of all or some of the above.

The point is, it was just an experiment. The formula didn’t work, so you go back to the drawing board and adjust the formula (this is where having a coach helps A LOT).

You’re tinkering. And the upside is that, whether you achieved your specific desired goal or not, performing that exercise over 8 weeks was good for your health anyway!

That’s a win. That should be celebrated. You did something beneficial for your health and, with a growth mindset, you’re making adjustments to improve your desired results.

Nothing about that is a “failure.”

When you allow for a mindset of experimentation of formulas, you remove YOURSELF from the equation as a variable. If the formula doesn’t work, it’s not YOU who failed, it just means you didn’t have the right formula. So you reset it, try again, and keep tinkering until you get the winning formula.

Everything we do is just an experiment.

It’s not trial and error, “error” assumes you screwed something up and incites self-judgment.

We are self-critical enough as it is. Research shows self-criticism is not motivational, it is prohibitive.

“Self-criticism is significantly associated with diminished goal progress, and this effect appears to be mediated at least in part by rumination and procrastination. These among other potential factors appear to limit the self-critic’s capacity to freely and adaptively pursue his or her goals, and these effects appear to be present across several arenas of goal pursuit, including academic, social, and health-related goals.”

This isn’t touchy-feely stuff, this is insight into human behavior.

Life is tough enough as it is. Change is hard. Let’s stop walking up the down escalator and leverage techniques that help us in our pursuits.

Life is just a formula. Our job is to experiment until we find the variables that work.